Right, so last week I was busy trying to put together all my ideas for things to have a go at and, shock horror, I actually managed it! (The threat of this blog is clearly working already). So, I don’t know about you, but for me the best bit about coming up with ideas, is just that- the ideas- you know, that feeling you get when you actually have an idea and feel super excited to carry it out? That’s it, you’re inspired…and it feels awesome. But…a lot of the time, perhaps more times than it should, that’s as far as it ever gets. Well for me anyway. I don’t want to speak for anyone else but I know that more often than not I’ll have a whole bunch of ideas, I’ll write them down before I forget them, make some kind of mental note that I’ll carry them out as soon as I have time and…that’s it. Nothing ever happens. Well, until now… Last year at college we were shown a video featuring a lecture by John Cleese about the creative process (there’s an annotation of the lecture here–> http://genius.com/John-cleese-lecture-on-creativity-annotated), and the thing that struck me the most was the idea that when we’re trying to be creative we have two modes that we work in- the first is the bit where we generate ideas and play around with them; this is the open mode (and the fun bit). The second mode is the closed mode. This is when we focus down and actually put the ideas into action (the serious bit). And for me this is the bit that always gets me; when I’m not really in the mood to ‘work’ and just want to have fun, switching from the open to the closed mode is very difficult. And the consequence? Everything I’ve mentioned above. Now I know I’ve waffled on about this a bit, but the point I wanted to make was, as I mentioned in my last post, I finally had an idea of how to combat this, and this week, I actually did it. So without further ado, I’d like to present you my time plan: 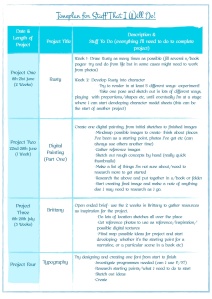 Okay, I realise it doesn’t look like much, but what I’ve basically done here is pick out my favourite 4 ideas from the giant list I started off with, and I’ve given myself a time frame to work to. So now (and I promise this is the last time I go on about it) instead of sitting at my desk wondering what the heck I’m going to do, or where I’m going to start with my giant list, I have one simple brief, which I’ve broken down even further into specific action points. Boom, open mode now has a focus, and when I get up/get home from work, I know exactly what I’m supposed to be working on. Result! PS. For anyone remotely organised or efficiently minded this was probably the most obvious idea in the world, and to be fair you’re probably right. But when you’re daydreaming around in your own little world, you’d be amazed how un-obvious the obvious actually is!